History of the Altona Forest Area

About 20,000 years ago the last great Canadian ice sheet invaded Southern Ontario. As the ice sheet retreated, a drumlinized till plain from the Oak Ridges Moraine south to what is now the Lake Ontario shoreline was formed. The smooth drumlin hills formed islands in ancient Lake Iroquois.

Approximately 12,000 years ago, the waters of glacial Lake Iroquois cut a prominent fossil bluff just north of the Altona Forest, a remnant shoreline of this ancient glacial lake (1). The Oak Ridges Moraine is the source for a number of rivers which flow south to Lake Ontario. One of these is Petticoat Creek which runs through a portion of the west side of Altona Forest. One of Petticoat Creeks small tributaries is the Rosebank Tributary which courses along much of the east side of Altona Forest but is sometimes dry to intermittent for part of the year. The meltwater from the receding glaciers sorted and stratified the soils around Toronto, including the Altona Forest area, into layers. These soils are underlain by more dense till layers at an average depth of 0.6 metre. Many residents in the area are familiar with these impermeable lower clay like layers which tend to retard deep percolation of water and make for difficult digging. As a result, the water in Altona Forest saturates the upper soil horizons and accumulates in depressions. The topography varies from uniformly level to gently undulating, except where man made drainage channels have been dug through the overburden (2). 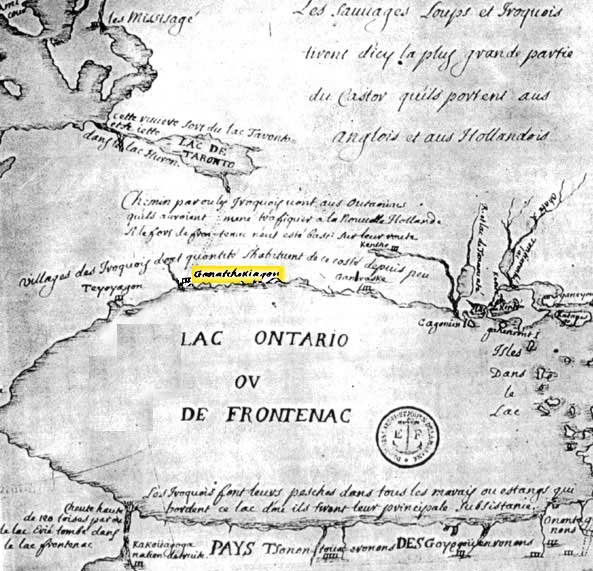 Above, one of the earliest maps of the region is this Joliet 1673 Map. This map is courtesy of the City of Pickering Library. The Altona Forest is located just north of the indian village of Ganatsekwyagon, which appears in yellow on this map.

Following the melting glaciers were roaming First Nations hunters. Six thousand to seven thousand years ago, these hunters were roving around much of Ontario. The tribes living in these parts were the Huron, Cree, Neutral, Petuns, Ojibwa and the Tribes of the Iroquois Confederacy; the Seneca. The Iroquois dominated 1650, and had settlements at Kanatsekwyagon near the mouth of the Rouge River, and another on the Bay of Quinte. Stone spear points and other artifacts have been found in many parts of Pickering including in Altona Forest. The earliest of these artifacts has been dated to 2000 B.C.

About 100 B.C. some limited farming by Iroquoian Indians was carried out along many of the rivers in the region. By 1100 A.D., First Nations people were hunting, gathering and farming in various parts of what is now Pickering. These tribes constantly moved as the soil was depleted and game became scarce. Evidence of villages have been found along Duffins Creek, around Frenchmans Bay, on Concession 3 north-east of Pickering Village and on Kingston Road west of the Rouge Valley. Although it is unlikely that any early inhabitants farmed Altona Forest, because of the poor soil, they did travel up Petticoat Creek and along Rosebank Tributary into Alton Forest in search of game. 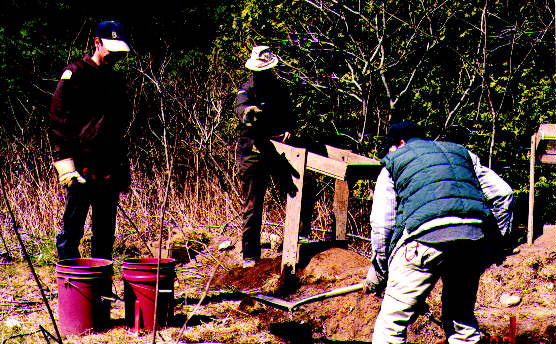 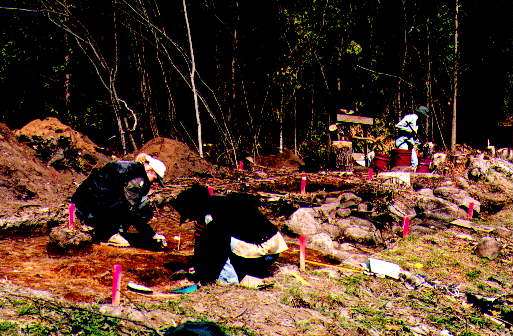 An archeology dig was performed in the spring of 2000 to find out more about the original habitants of the area. Evidence of pioneers and First Nations people were identified. 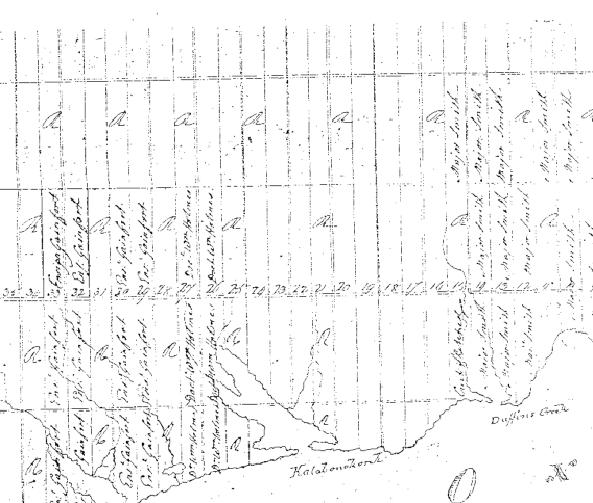 Early map of the area. Notice Ensign Gainfort has lots 32 and 33 from the lake north to what is now Finch on the northern boundary of the Altona Forest. 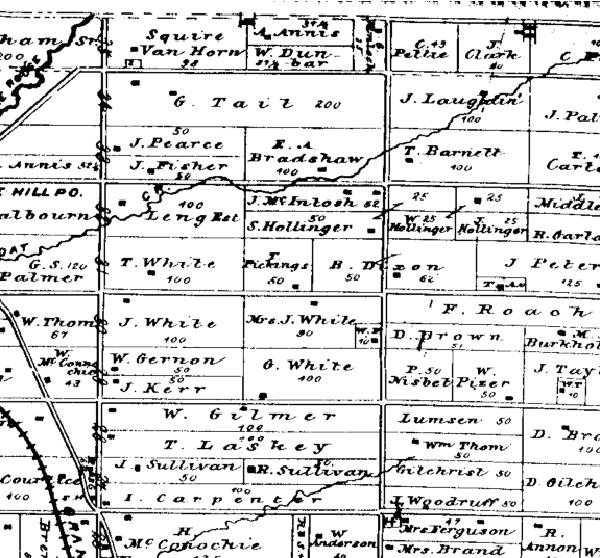 This 1877 map shows that Lot 32 is divided into three sections. Notice the locations of the houses. The railroad tracks in the south west of this map belong to the Grand Trunk.

In 1791, Engineer Augustus Jones started surveying all of Pickering in preparation for settlers. Altona Forest is located in Concession 1, Lot 32. The small river running through the area already had a French name  Petite Côte, which quickly became Petticoat. On May 25th 1796, Governor Simcoe ordered that Whitby, Pickering and ten other townships be declared open to settlers. Enormous land grants were made to government officials and members of their families and friends (3). Soon after a number of military grants were made. In the mid 1790s, the first settlers began arriving. Many of these were United Empire Loyalists. Map #1, which seems to be the first map of settlement, has only three land owners in the Pickering area; Major Smith in the region of Pickering Village, Doctor William Holmes in Lots 26 and 27 and Ensign Gainfort in Lots 32 (Altona Forest) and 33. In the official land records for Lots 32, Con. 1, lists the following:

Therefore, the official records show the original official government grant of All 200 acres of Concession 1, Lot 32, was granted to Dr. Wm Holmes not Ensign Gainfort! The official records show that the land stayed in Dr. Holmes possession until Dec. 24, 1832 when he sold a portion to Henry Corran for £300. He, in turn, in 1840, sold the southern ½ for £50 to John Corran, who was probably his son. In 1849, Henry Carron sold the northern ½ to William Taylor for £300. A small portion of the northern part of Lot 32 and some of the southern part near Petticoat Creek, are more suitable for farming than most of the middle section. This may be one reason for the frequent sale of the property and its use for grazing animals rather than extensive farming.

In 1961, Canadian National Railways acquired property near the southern edge for a railroad right of way. The CN track are there today.

The Altona Forest is a critical component in the Rouge-Duffins Wildlife Corridor which joins the Rouge, Petticoat and Duffins watersheds. In turn, these watersheds provide linkages to a large network for wildlife movement to the Oak Ridges Moraine, Lake Simcoe and Lake Ontario. The Altona Forest and the larger Rouge-Duffins Wildlife Corridor provide vital habitat, contribute to wildlife movement and enhance the health and biodiversity of plants and animals east of Toronto (1). The Altona Forest consists of mature forest with old growth characteristics and numerous early to mid successional growth areas, such as old fields and wet meadows. A person who walks all the trails of Altona Forest will experience all of these diverse vegetation communities.

Altona Forest is a unique urban forest. Less than half of one percent of the wooded habitat remaining in the Greater Toronto Area (GTA) provides mature interior forest habitat that has a core area at least 300 metres from the forest edge. Altona Forest is one of the few large areas remaining, adjacent to Lake Ontario, where migrating birds have the protection of forest cover for resting and feeding during migration (1).

During the 1950s and 60s, land developers started purchasing property in Pickering in hopes of development. Bramalea Consolidated Development Ltd. purchased much of Lot 32 from a holding company in 1972. The official price of $2, indicates that the holding company was probably a part of the Bramalea group of companies. In preparation for building houses, they attempted to drain the wet lands within the forest and did much damage to the natural habit in doing so. See the Trail Guide for more on this.

Thanks to a group, Friends of Altona Forest, who lobbied the government and made numerous presentations about the importance of this area, a portion of the projected housing area was set aside while most of the forest was designated for development. During the 1990s, the Metropolitan Toronto and Region Conservation Authority acquired the Altona Forest 50-hectare preserve with the help of an $11 million provincial grant. Other properties where purchased by the MTRCA and were added to Altona Forest. In 1996, Dr. John Murray Speirs donated a large portion of his property to Altona Forest on condition that it would remain a natural preserve. A portion of the southern part of Altona Forest is the J. Murray Speirs Ecological Reserve and is not open to the public. Today, Altona Forest is run by the Toronto and Region Conservation Authority in conjunction with the Altona Forest Stewardship Committee.

The Altona Forest is the home to a great variety of plant and animal life including a large number of migratory and nesting birds. Altona Forest is the one of the last urban forests in southern Ontario, and home to white-tailed deer, red foxes, coyotes, wood duck, ruffed grouse, great-horned owl, pileated woodpecker and fascinating pond creatures such as fairy shrimp and wood frogs. The trees offer a rich diversity: tall hemlocks, dense cedar, oaks, aspen, hornbeams, blue beech (sometimes called muscle trees), ironwood, white birch and even some old apple trees. The flowers of the upper woodland areas are particularly remarkable for a woods surrounded by urban development. They include large patches of trilliums, pink and mauve hepaticas, wild ginger, wood violets, pink spring beauty, waxy white Mayapples, yellow trout lilies and showy pink and white ladyslipper orchids. A quiet leisurely walk in the forest affords a person the opportunity to see and hear the wonders of nature without traveling great distances.