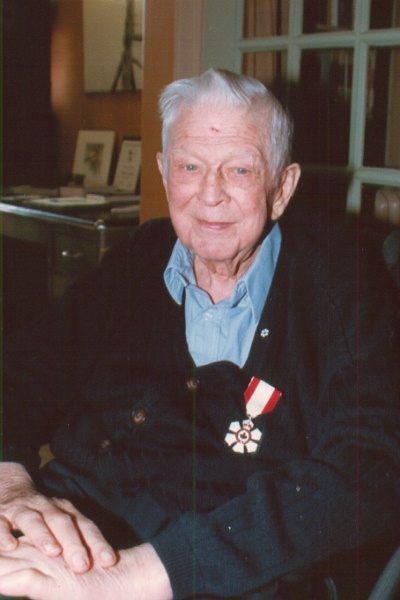 For much of the last century, Murray Speirs was a familiar figure along the marshes and bays of the Toronto-area waterfront. A tall man, in a blue beret, binoculars around his neck and a huge telescope on its wooden tripod over his shoulder, he was a birders' birder. Often, he attracted children who'd stand on tip-toe for a peek at through his scope, focussed perhaps on a painted turtle sunning on a log, or a Common Goldeneye riding the waves. "Everything living was important to him,'' says his granddaughter Margaret Wilson, one of many who learned birding at his side. "He made me much more observant than I was before.''

For forty years, Dr. Speirs taught zoology at the University of Toronto. He published .meticulously researched articles on bird behavior. He was the author of Birds of Ontario Country, Birds of Ontario, and co-author of A Naturalists' Guide to Ontario. He was a founder of the Federation of Ontario Naturalists and several birding clubs. But what made him an icon among birders and all lovers of wildlife was his generousity of spirit. He shared both his expertize and his personal resources. He helped purchase Thickson's woods in Whitby and gave seven of his own acres to the Altona Forest. Within the forest, a protected ecological reserve has been set aside to honor Murray and his wife Doris, his longtime birding companion. He was a mentor to the next generation of naturalists and friend to wildlife artists Robert Bateman and Barry Kent MacKay. Last year, at age 91, he was named a Distinquished Ornithologist by the Ontario Field Ornithologists; was recognized with a Lifetime Achievement Award from the City of Pickering; and --his biggest thrill--received the Order of Canada from the hands of Governor-General Adrienne Clarkson. To the time of his death in early September, he still watched with interest the chickadees and cardinals that came to the feeder on his window.

Murray Speirs was my uncle, and to me his greatest contribution was as an environmentalist ahead of his time. When he was only 15, living at my grandparents home on downtown Wolfrey Avenue, he bought the first of the black notebooks in which he recorded every bird he saw or heard until the end of the century (His first was a herring gull). But his interest was much deeper than recording new species for a life list. The little notebooks, now occupying several shelves, are crammed with expert observations of bird behavior and habitat. "He didn't just identify birds, he studied their numbers , behavior and habitat,'' says Bruce Falls, a lifelong friend and fellow zoology professor.

When Dr. Speirs was young, birdwatching meant killing birds. "We were indoctrinated that if we wanted to be sure of an indentification, we had to collect the bird,'' says Dr. Falls. My uncle was prominent among a newer breed of birders who rejected collecting and proved he could identify birds accurately through his telescope, or by ear. He had a perfect ear for bird calls. In 1935, when he was teaching school in Timmins, he wrote in his notebook of his first encounter with Gray Jays. "Larger than I expected . . . they chuckled, grunted and gargled very solemnly for us. Having learned their dialect, I attempted to imitate it and one of the three came up to about 20 feet from us and inspected us from the top of a tree stump.'' Anyone birding with him was astonished by the accurate whistles and clicks with which he imitated bird calls, and by his ability to name unseen birds--and whether they were male or female, mature or immature--just from their voices.. When he was doing his thesis on the American robin in Illinois, Dr. Speirs became interested in quadrant studies of bird populations and territories. He introduced this more accurate method of studying the ecology of birds in a study at York Downs, and taught this painstaking field research to his students all his life. He was a founder of the breeding bird survey in Ontario. "He was a serious, meticulous person who gathered information other than just the sighting of birds, and among naturalists that was rare,'' says Dr. Falls. One of Dr. Speirs' final acts was commissioning birder Brian Henshaw to update five decades of study of the birds of the Altona Forest to show the decline in migrant species as development encircles a woodland. Over the years, birders who tromped the fields and woods at my uncle's Pickering home, were inevitably led out to the wooded pond to discover the tiny pink fairy shrimp lurking in the shaded waters, or in spring, the hepatica and spring beauties among the fallen leaves. "He was an all-round naturalist ,'' says Barry Kent MacKay. "He was a consummate teacher. If you came into his sphere you learned wonderful things about the intricacies of how all creatures interrelate to one another.''